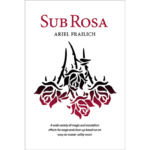 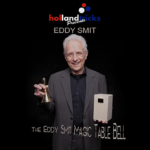 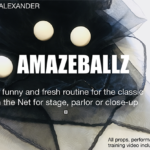 Sub Rosa is a wonderfully deceptive and versatile utility technique that you can learn in seconds and master in minutes. It can be applied to a huge variety of closeup and stage magic and mentalism: transpositions and transformations, predictions and

Sub Rosa is a wonderfully deceptive and versatile utility technique that you can learn in seconds and master in minutes. It can be applied to a huge variety of closeup and stage magic and mentalism: transpositions and transformations, predictions and divinations, Torn and Restored and penetration effects, card matching and color separations, and much more.

Over sixty effects are included, such as:

Plus, a headline prediction, a Cups and Balls technique, a key bending effect, a card revelation, a finale for the Linking Pins, a spirit writing and a spirit photography effect, book tests and more.

Many effects have fully scripted presentations. There are humorous routines, straight pieces, and even a couple of Bizarre effects. Themes include: an experiment in Dr. Rhine’s ESP lab; learning card tricks; dead celebrities; winning at Bingo; bad luck at cards, even with the help of magic; a murderer; a dead clown; a would-be student of divination; good luck charms; tattoos; voodoo; and more.

Last but not least, with the Sub Rosa technique, you can often use inexpensive, ordinary items instead of specialized apparatus to accomplish similar effects.

Quentin Reynolds, well-known professional magician and mentalist from the UK:
“If you are familiar with any of Ariel Frailich’s published works you will know that his main focus is on presentation, his book Card Stories being a perfect example.
“He sees beyond moves and sleights as he explores the possibilities of the routines that can bring those hidden techniques to life and engage an audience. Although his sleight-of-hand skills are considerable, here in Sub Rosa, he takes a simple technique known by most magicians — even though no one seems to know what it is called and hardly anyone does it — and explores it in detail before teaching how it can be used in many different performing situations. He calls it Sub Rosa: ‘The rose as a symbol of secrecy dates back to at least ancient Greece. In Medieval Europe, a rose suspended from the ceiling of council chambers, or sometimes carved into the ceiling, pledged all present to secrecy, thus Sub Rosa, ‘beneath the rose’, came to symbolize secrecy.’
“The technique is simple to grasp and understand. With a few minutes practice, it’s not just undetectable, but there is not the slightest suspicion anything has taken place. It is one of the most natural moves ever developed and it won’t surprise you to know it’s often used by swindlers and con men. Once you’ve got the basic handling, you will learn the many ways it can be used in both close-up and stage performing environments. You’ll then explore the sixty-odd different presentations for tricks and routines, where the technique will improve the handling.
“There are sections on both magic and mentalism, along with exploring added secret devices that can be used alongside the technique.
“When Ariel asked me to look over this manuscript, I expected something of about thirty pages. In fact, there are 180 pages, very well written with ample photos where needed. Ariel is a very good teacher and in this exhaustive treatise, you will find — at the very least — one routine you will use. But of even greater value, it will get you thinking about using this technique in effects you already perform, and that is something we all need more of.
“Most definitely recommended.”

Jim Short, seasoned worker:
“I have arthritis and essential tremor, but I still want to perform strong magic. I’m always on the lookout for things that don’t require me to deal out 21 cards into 3 piles multiple times, and things that look like, well, magic.
“I recently ran across Sub Rosa by Ariel Frailich. It ticks all the boxes for me. I